Many left their homes with nothing and desperately need shelter, lighting and other essential items. Vero said:

“The camp in Cox’s Bazar is really colourful. In such awful circumstances, there is a lot of life. We saw a couple who had just married, a man having dental work in a crowd, children playing. I also saw the solar lights that ShelterBox provided. They are very useful, especially for families to share a dinner with at night. These are family moments you have to cherish, especially when you have lost everything. I think hope and strength is all over these camps.”

Rohingya children in an Islamic school funded by an Imam and built last year. This part of the Kutupalong camp was built 28 years ago by the first Rohingya who fled Myanmar. 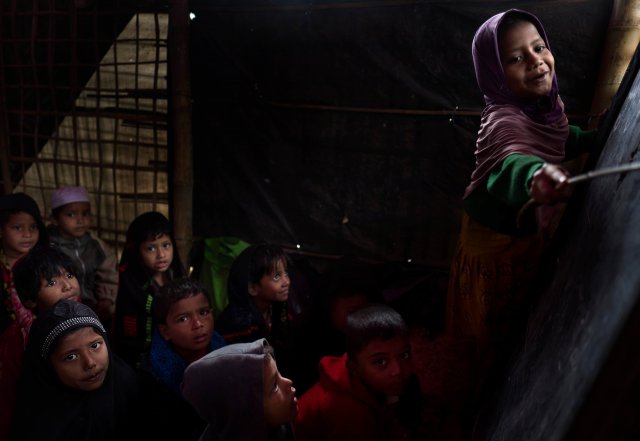 A young girl wraps herself up from the cold early morning in Kutupalong Refugee Camp where more than 700,000 Rohingya Muslims live. 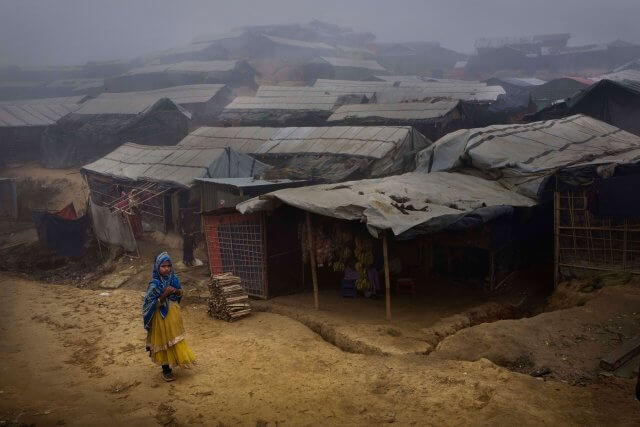 More than 700,000 Rohingya who fled violence in Myanmar are living in Kutupalong Camp. 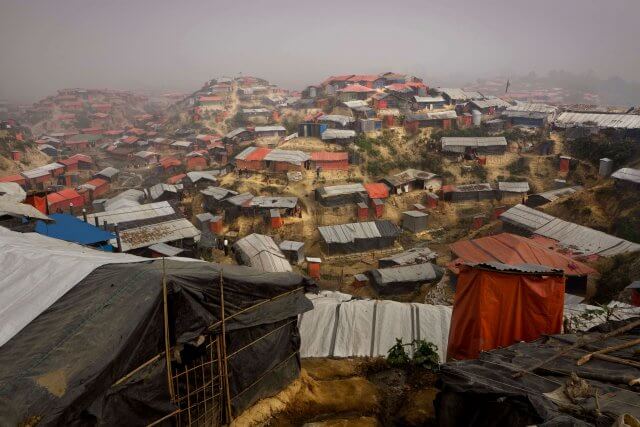 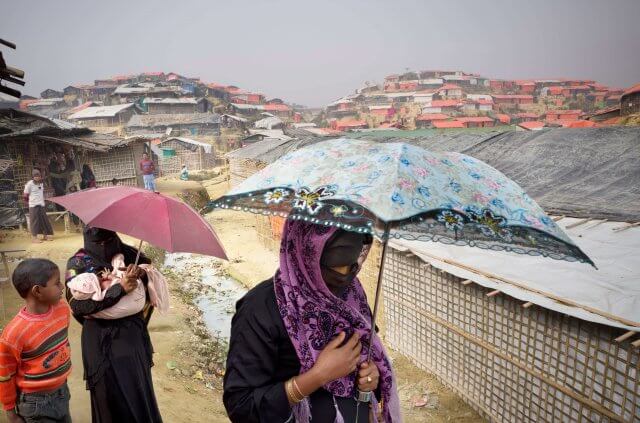 New arrivals from Myanmar are led into the camp to their new homes. They are carrying all the minimal items they manage to take with them when they fled.

Three-hour-old baby born in Kutupalong refugee camp in Cox’s Bazar. His mother walked for three days to reach the Bangladesh border heavily pregnant, not knowing if her child would survive. 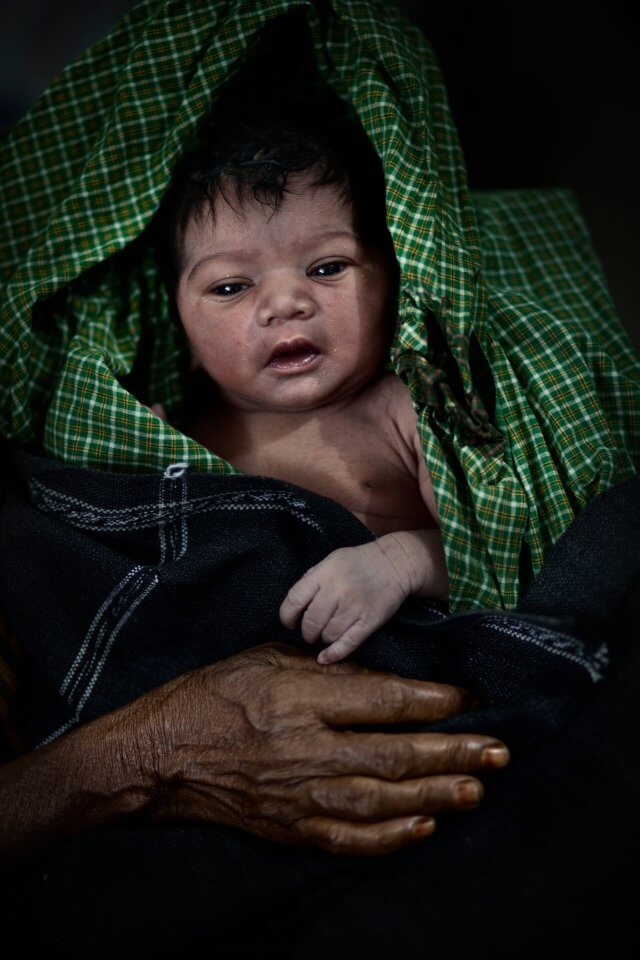 The open river inside the camp is where many Rohingya families wash and children play, bringing some kind of normality into their daily lives. 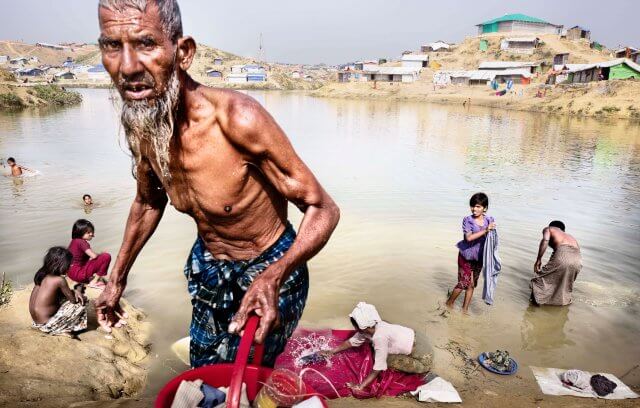 20-year-old Hosna Ara had just given birth to her 3rd child at IOM medical centre in Kutupalong Camp. Her mother, Minarva is proudly holding her grandchild. 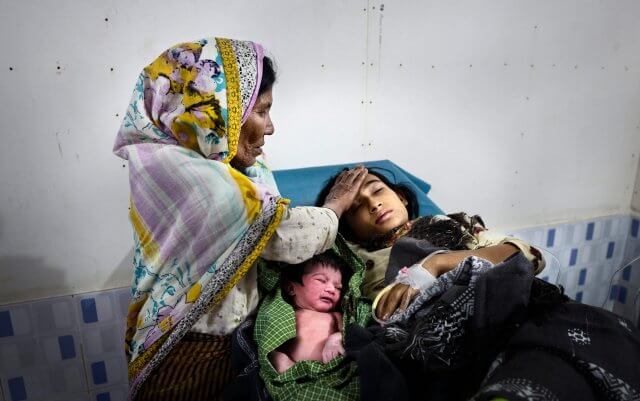 A mother and child use a solar light given by ShelterBox 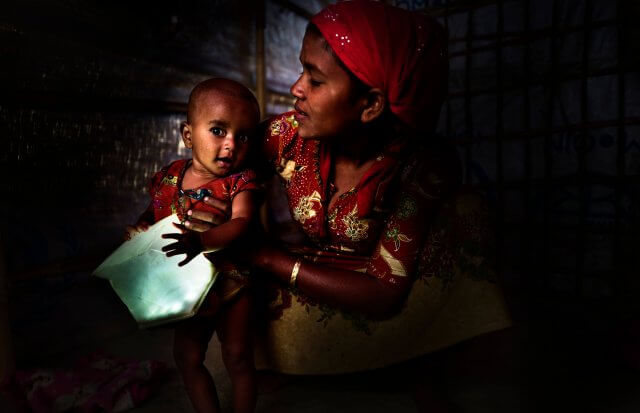 Each morning thousands leave to the nearby forest for the day to collect firewood. They are stripping mountains around the camp but they need fire to cook. 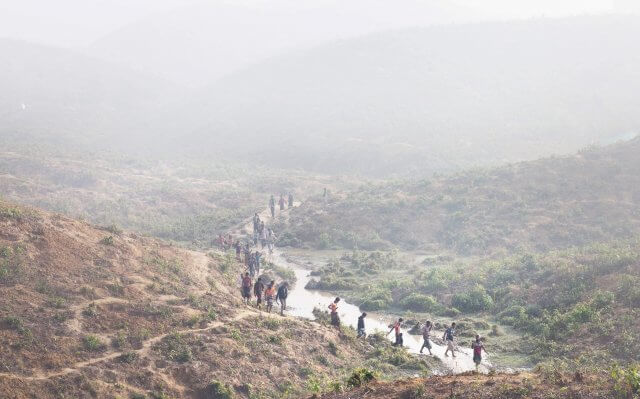 Every day in Kutupalong Camp thousands of men, women and children can be seen carrying huge piles of wood back from the forest to cook with and to keep them warm during the cold nights. A large crowd holds its breath as a dentist is putting a fake tooth inside the mouth of his patient. Two dollars for a tooth to smile again. Life carries on at Kutupalong Camp. 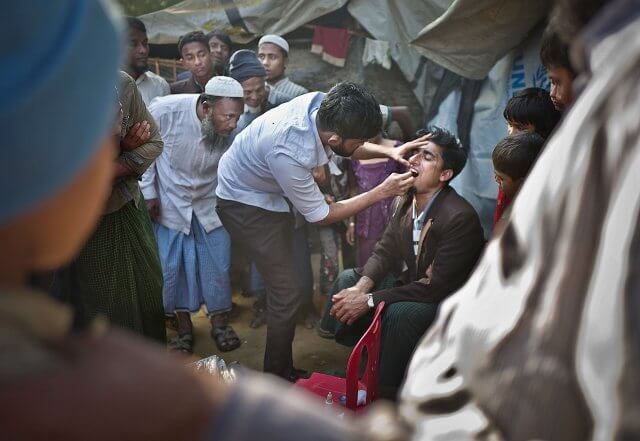 Ali Hussein and his wife, Shomi Nara, had only been married for 10 days when we met them in the camp. They had a small party and rented a radio to play some music. 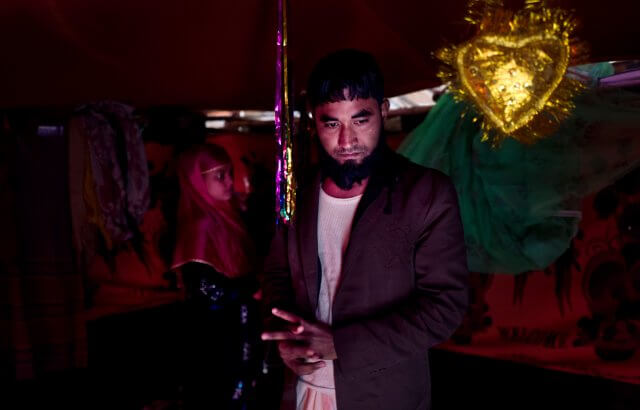 Deep inside Balukhali refugee camp in Cox’s Bazar, live newlyweds Ali Hussein, 26, and his 17-year-old wife Shomi Nara. They had been there for four months after fleeing horrific violence in Myanmar.

Even though they were from the same village, they had never met before entering the camp. Ali said his initial thought when he first laid eyes on Shomi was, ‘I’m feeling good.’

Ali didn’t want to marry in the camp because they could not celebrate in the way he would have liked, but they had no choice, ‘I wanted to arrange a big party for the wedding. In the camp my conditions are not so good, so I could not do this.’

On her wedding day, Shomi wore a traditional yellow Rohingya wedding dress. When asked if she was happy to be married, Shomi giggled shyly and nodded her head. It was clear from her smiles she was happy.

20-year-old Hosna Ara gave birth to her third baby in an IOM (International Organization for Migration) medical centre in Kutupalong Refugee Camp just three hours before this photo was taken.

The baby weighed only 2.6 kg, but both mother and daughter were healthy.

The staff from a different medical centre – this time the International Federation of Red Cross – said only four out of ten Rohingya babies born in their field hospital survive.

The majority of the babies are stillborn. The tough journey to the camp causes complications that go untreated and many babies die in the womb.

Some women have been in labour for days before they reach anyone who can help. For many, the hospital is their last stop.

ARAFA AND HER YOUNGEST CHILD

Arafa lives with her husband and five children. The family had been in the camp for three months when we met them.

She told us her village in Myanmar was set on fire as the family fled: ‘We were fired at, they had big guns with rockets that set everything on fire. They tortured us and threw our children on the fire, they raped the women, we had to run away.’

It took them 15 days to get to the border. Arafa and her husband took it in turns to carry their children. ‘We started our journey on a boat, then we reached a forest where we took rest. We stayed there hiding for a while then continued our journey.’

We asked Arafa and her family if they wanted to go back and everyone shook their head, even the younger children. ‘The situation is not good, we do not get proper treatment there. We want to remain Rohingya and have our own country.’

Sectarian violence in Myanmar has forced over half a million Rohingyas to flee to Bangladesh.

Devastation in the Caribbean

Dougie travelled with us to the Caribbean, where in early September 2017, a Category 5 Hurricane named Irma caused devastation.

Tom visited the refugee camps in Cox’s Bazar, Bangladesh, where more than half-a-million people crossed the Myanmar border after unimaginable violence forced them to flee their homes.

Olly travelled with us to Somaliland, where the most severe drought in decades has affected around 766,000 people.

Four leading photographers Olly Burn, Tom Stoddart, Veronique de Viguerie and Dougie Wallace helped us to pay tribute to the incredible hope and strength of the people we meet.