ShelterBox will be providing emergency shelter to people in the Philippines following a deadly typhoon that’s displaced more than half a million people.

As the death toll from Typhoon Rai continues to rise, teams at ShelterBox are readying themselves to distribute shelter aid and other essential items it has stored locally to people whose homes have been damaged or destroyed.

With gusts of up to 150mph, the typhoon was equivalent to a Category 5 hurricane and one of the most severe storms in the world this year. Its path took it across areas of high poverty, and damage to communication lines, fuel shortages, and Covid travel restrictions are making relief efforts more challenging.

ShelterBox Chief Executive, Sanj Srikanthan said: “This deadly typhoon has left hundreds of thousands of people displaced just before Christmas and the damage to homes we are witnessing is truly harrowing.

“The Philippines is a country still rebuilding having been ravaged by storms far too often, but Typhoon Rai is on a scale our team there simply haven’t seen before. It’s left large areas of the country decimated, and we’re expecting the death toll and damage reports to get much worse.

“We’ll be responding with emergency shelter that we have stored locally to help Filipinos whose homes were in the path of the storm – many who haven’t yet fully recovered from previous disasters.”

The Philippines is one of the world’s most disaster-affected countries. Since 2004, ShelterBox has responded, on average, nearly twice a year.

Head of UK Giving and Supporter Engagement at ShelterBox, Alice Byron said: “The situation in the Philippines is desperate and that’s why we’ve launched a Typhoon Rai Appeal.

“We’ll be doing everything we can to help people whose homes have been destroyed or damaged. That’s possible thanks to our supporters who in times of crisis come together to help families who have lost so much.”

To find out more about the relief effort and how to help as families start to rebuild their homes, people can visit the ShelterBox website – shelterbox.org/where-we-work/super-typhoon-rai/. 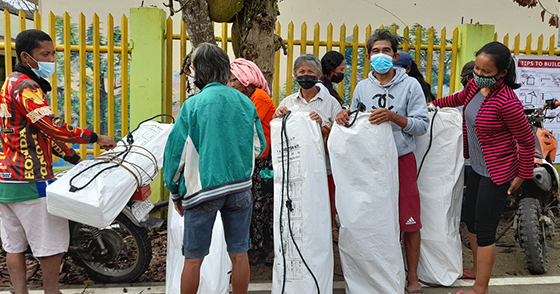 Our work in the Philippines

The Philippines is hit by a series of deadly disasters every year. See how we’ve responded to disasters over the years.

Get the latest updates from the field and discover where we’re supporting communities around the world in the aftermath of disaster and conflict.