Extreme storms: 3 stories of survival you should read

And as the climate crisis intensifies, these storms are getting even more destructive. In fact, it’s estimated that in the next 20 years, extreme storms will uproot more than 200 million people.

Communities in some of the most vulnerable places around the world are witnessing the reality of this right now. But amongst the chaos shines a small glimmer of hope.

Read three incredible stories from people who have witnessed the wrath of extreme storms in Vanuatu and Malawi.

‘We hid our children under the bed’ – Shelley’s story 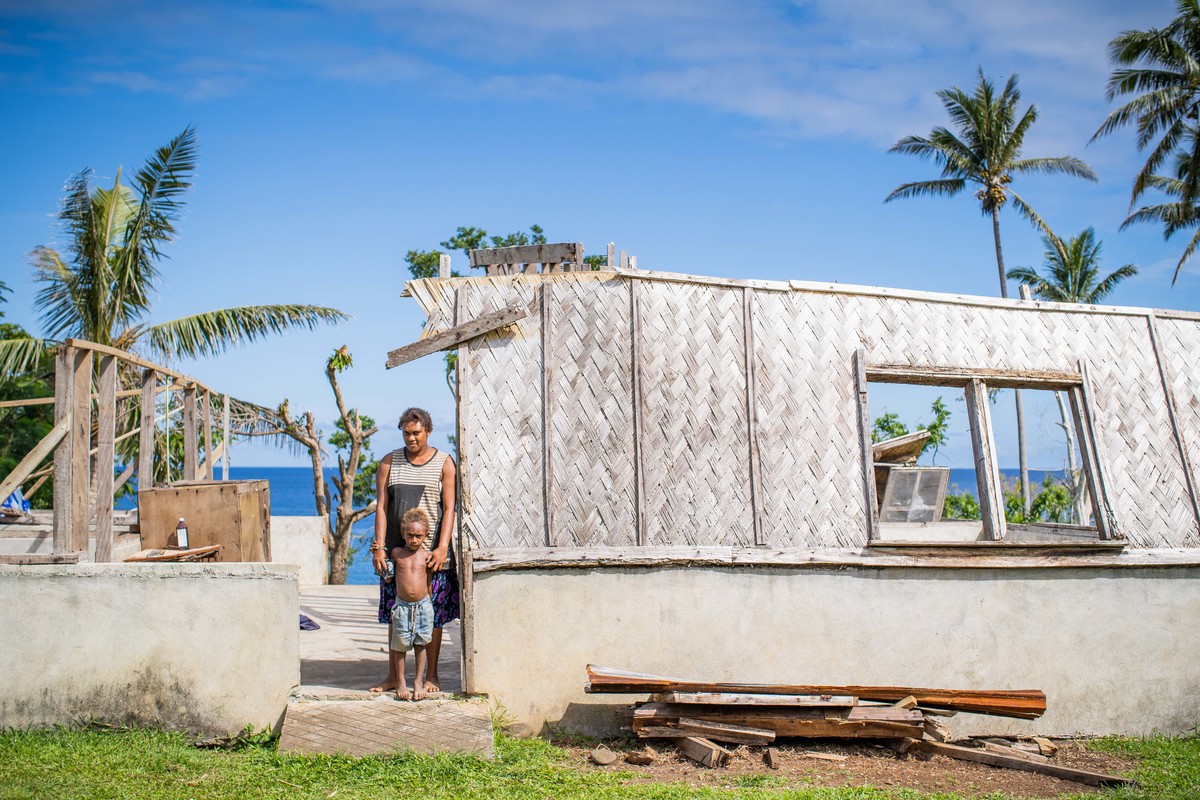 Shelley and her son Locklin stand in the house where they took shelter when Cyclone Harold hit. The storm ripped the house to shreds, leaving the family scrambling for a safer place to hide.

When Cyclone Harold hit the small pacific islands of Vanuatu in 2020, it wrecked homes, gardens and anything else in its path. Shelley was one of the people who was affected.

It was just getting dark on Pentecost Island when the residents realised this was not your average cyclone. As the eye of the storm passed directly over them, Shelley and her neighbours sheltered together in one house.

As the children hid under the bed, their eyes kept watching the roof. The men in the group tried to hold it down, but the force of the wind was so strong it lifted their feet off the ground.

Eventually, they knew they had to let it go. Like a wave, the roof peeled back across the house until it was completely gone.

The house was now disintegrating into debris around them. After a brief scouting mission, one of the young men found Shelley’s kitchen still intact and the group decided to move.

Earlier in the evening Shelley had reinforced the natungura thatched roofing of her kitchen. She used pieces of cloth, tying the beams to fixtures on the ground. The effort had paid off.

But as Shelley and her community huddled shoulder to shoulder in her kitchen, the cyclone raged on. A flying piece of tin roofing smashed a hole in one of the walls. Every adult who was not holding a child or heavily pregnant was holding on to the house.

After the cyclone had passed, the community came together again. They agreed to rebuild each damaged house one by one, including the gardens, which was their main source of income.

Shelley’s family were one of 2,000 households who received ShelterBox aid after the storm. She used the tools, fixings and tarpaulin to reinforce and fix her home. 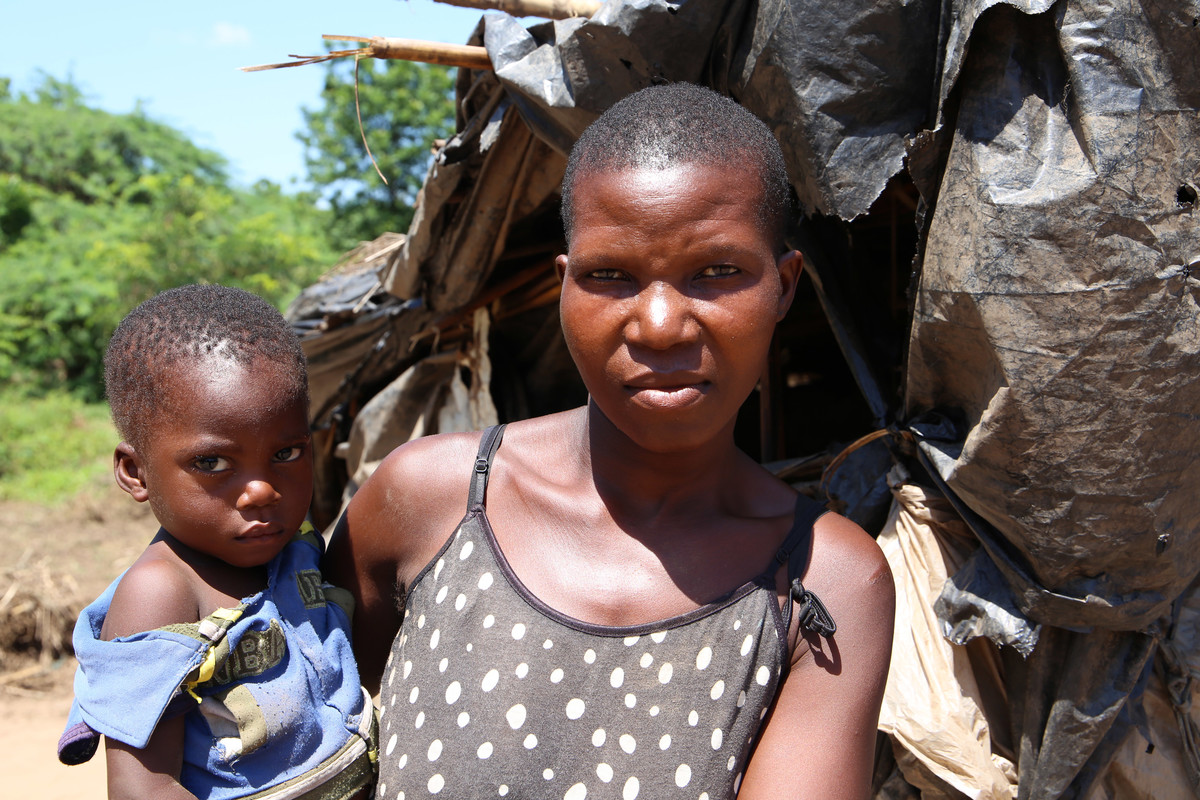 Grace holds one of her children in front of their makeshift shelter in Malawi.

In March 2019, Malawi saw the worst rainfall in years, causing extreme flooding across the southern part of the country. Then Cyclone Idai tore through the region, causing even more destruction.

90,000 people lost their homes – including Grace, a widowed mother of six. The fast-flowing water washed away her entire home and all her belongings.

As the storm raged on, the floodwater gathered moment, sweeping away everything in its path.

“I was panicking because the water was running fast and I had nothing left, I lost everything. We even tried to climb the trees to run away from the water”. Her youngest child Miracle was on her back at the time.

But it wasn’t just the flooding she was fearful of. “It was very scary, there were crocodiles in the water.”

Grace and her family survived the storm and when the flooding subsided she built a makeshift shelter next to her damaged house. Using ShelterBox aid, she was able to start recovering from this life-changing experience.

“We covered my small baby, I carried her, and covered her with a blanket.” – John’s story

John together with his children. In the background is his home, covered with ShelterBox tarpaulin.

When Cyclone Harold hit Vanuatu, John and his family stood together in their house. But the bamboo walls and tin roofing were no match for the terrifying cyclone raging around them.

Scared for his family’s life, John decided they would join his brother who had a brick house. It was the right decision to make, as not long after that the storm ripped John’s roof off its rafters.

“When I looked down the hill [to my place], I saw that the light was no longer there. Then I knew [the roof] had all flown away.”

But even in the brick house, they couldn’t escape the extreme storm. One of the shutters flew open and rain poured in, making everything wet. Using buckets, the men emptied the water from the house. And when the storm lulled, they ran outside to nail back the window shutters. John recalls:

“We got a fright when the [wind suddenly changed]”. The eye of the storm had passed and the intensity of the wind coming from the ocean was now reaching full force. John had just made it back inside when the first piece of tin flew off the roof.

“The rain came inside. We waited and waited, then the veranda blew away.” John knew the door would blow out too. “The two of us held the door, we put a bookshelf against the door [and] we nailed it in to hold it there. We held tight all the way till morning.”

The next day, John had to climb over fallen trees and piles of debris to reach his parent’s home and check if they were safe. Using the tarpaulins and tools he received from ShelterBox, he was able to fix his home and move back in with his family. 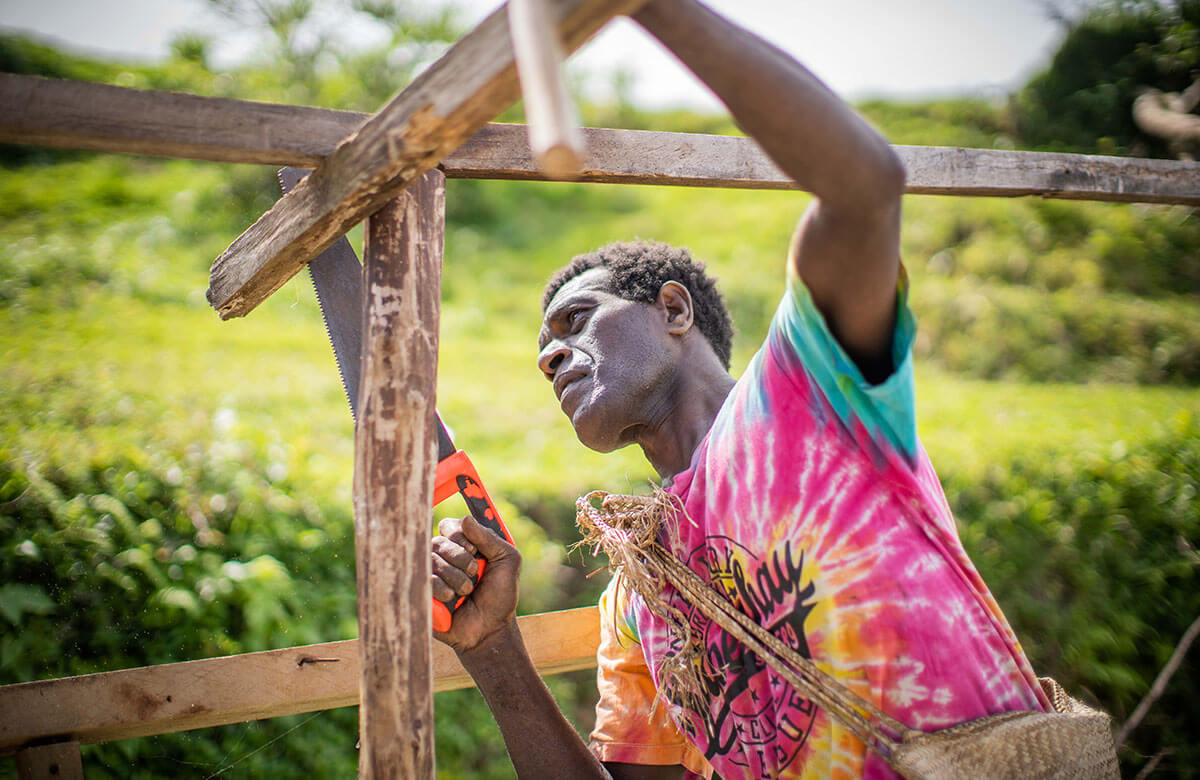 As the climate crisis intensifies, so does the need for our work.

We will continue helping people on the frontline of extremem storms and climate change as long as it’s needed. But we can’t do it without your help.

Please support our work today to ensure that we are ready to help families after extreme storms and other disasters all around the world.