THOUSANDS OF ROHINGYA FAMILIES HAVE BEEN SHOT, STABBED, BURNED OR BEATEN TO DEATH. NOW CYCLONE SEASON IS COMING, THREATENING TO TEAR APART THE FLIMSY SHELTERS THAT FAMILIES ARE LIVING IN.

Sectarian violence in Myanmar has forced over half a million Rohingyas to flee to Bangladesh.

Thousands have been shot, stabbed, burned or beaten to death. Women have been raped and children killed. Hundreds of thousands of families have fled for their lives, trekking through the jungle for days to arrive at Kutapalong camp in Bangladesh.

In the camp, families rely on makeshift shelters of thin plastic sheets and bamboo to protect them from the rain, sun and wind. Despite everything, Rohingya families get on with their daily lives, collecting wood and water, washing clothes.

But now cyclone season is coming and thousands are facing danger again.

The Kutupalong camp is built on mud-caked hills, and the Monsoon rains are torrential. Flash floods and landslides will tear apart the flimsy shelters that families are living in.

Families like Juhar’s (pictured), who have been through so much already, desperately need protection.

Like many other families in Syria, Iraq and the Philippines – or wherever disaster strikes – they need heavy duty tarpaulins, and toolkits with hammers and nails so they can build strong, secure shelters.

This appeal has now closed. See where we are working now.

Shelter is more than a roof

Earlier this year, critically acclaimed photojournalist Tom Stoddart travelled with us to meet Rohingya families living in the refugee camps in Bangladesh.

In this video, Tom shares his experiences and tells us about the incredible courage that these families have shown in circumstances defined by violence and tragedy.

We can’t replace what’s lost, but a £40 donation can provide a family with the tools to start their own recovery. Donate today

Juhar is 12-years-old. Wrapped in a bright red blanket, protecting himself from the early morning chill, he was out early in the morning playing with friends on a hill in Kutupalong when we met him.

Juhar travelled from his village in the Rakhine State of Myanmar with ten family members including his mother and siblings.

His father died a year earlier. ‘We left because they were killing all Rohingyas. We walked through the jungle for three days.’

Now families like Juhar’s, who have been through so much already, desperately need protection from the flash floods and landslides that will come with the Monsoon season.

Just £40 will pay for protection like heavy-duty tarpaulins, and toolkits with hammers and nails, so they can build strong, secure shelters.

This appeal has now closed. See where we are working now.

Families in Kutupalong refugee camp in Bangladesh have already been through so much. Now thousands are facing danger again as cyclone season looms. 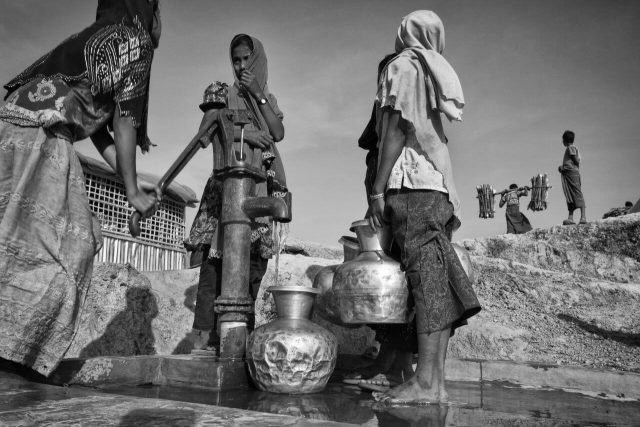 Rohingya girls study the Koran at dawn outside a mosque in Kutupalong refugee camp at Cox’s Bazar, Bangladesh. Over 655,000 Rohingya have arrived in the area since August 2017 fleeing persecution in neighbouring Myanmar. (C) Tom Stoddart 2018. 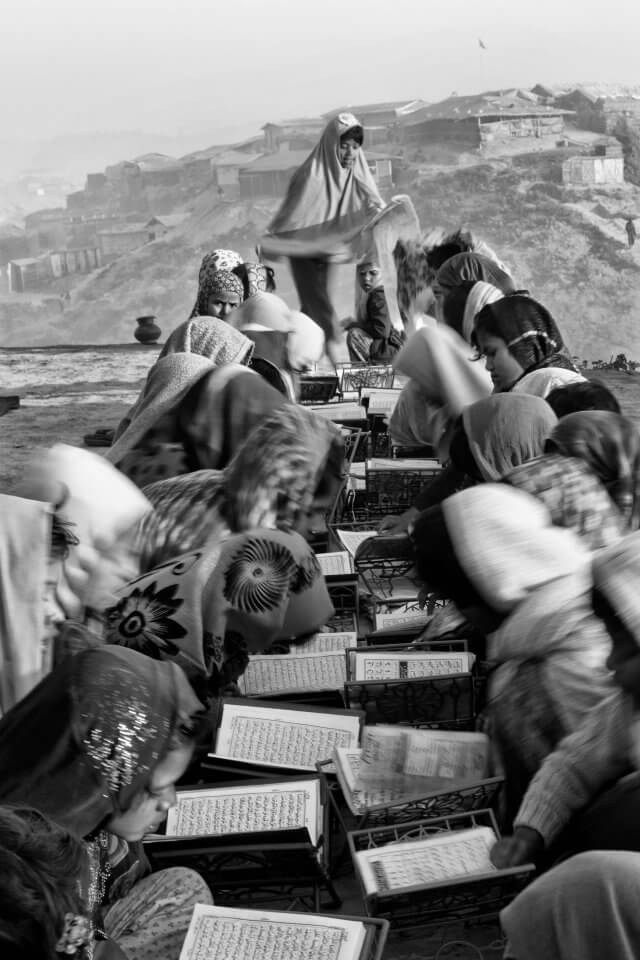 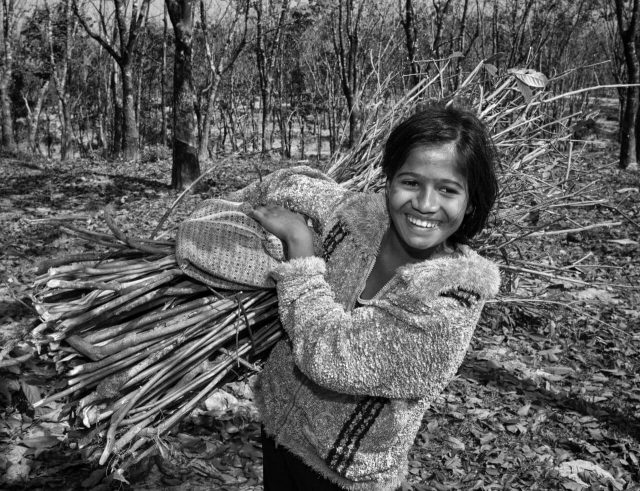 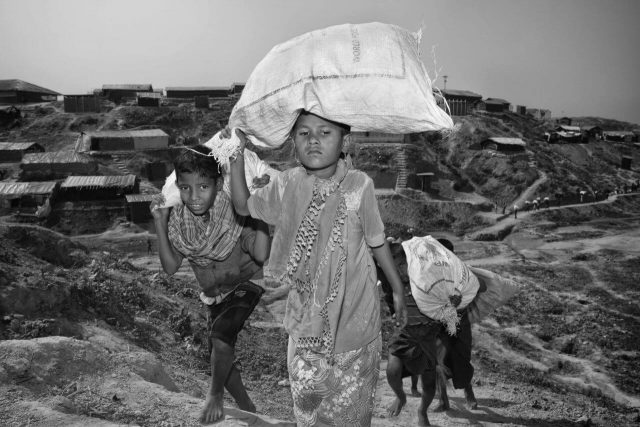 The sun rises over Kutupalong camp, where thousands of Rohingya families have taken refuge after fleeing horrific violence in Myanmar. (C) Tom Stoddart 2018. 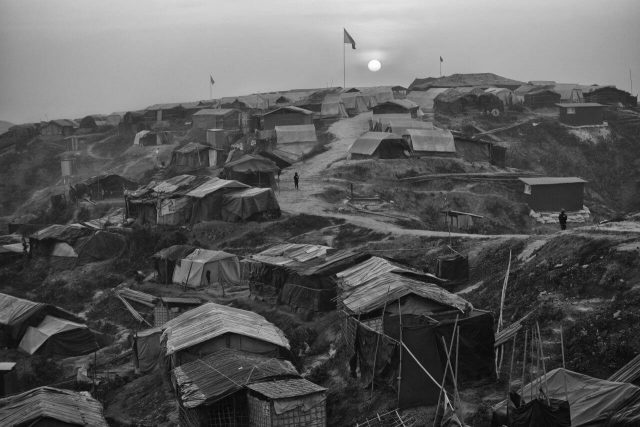 12-year-old Hossion Juhar wraps himself in a blanket to keep warm early in the morning as the sun rises over the camp. (C) Tom Stoddart 2018. 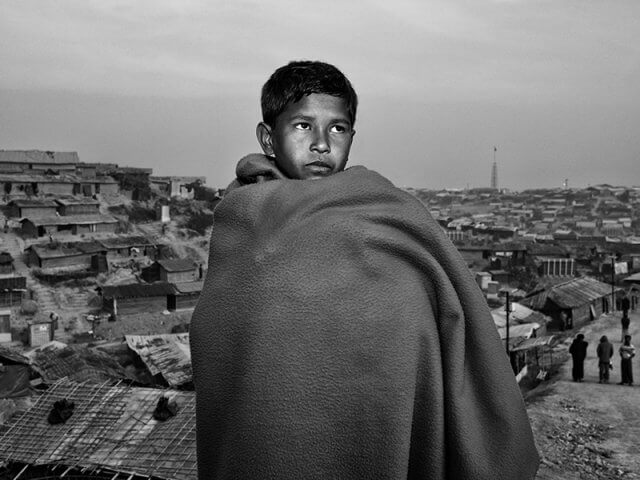 A Rohingya man and his distraught son wait for aid to be distributed after arriving at the camp. (C) Tom Stoddart 2018. 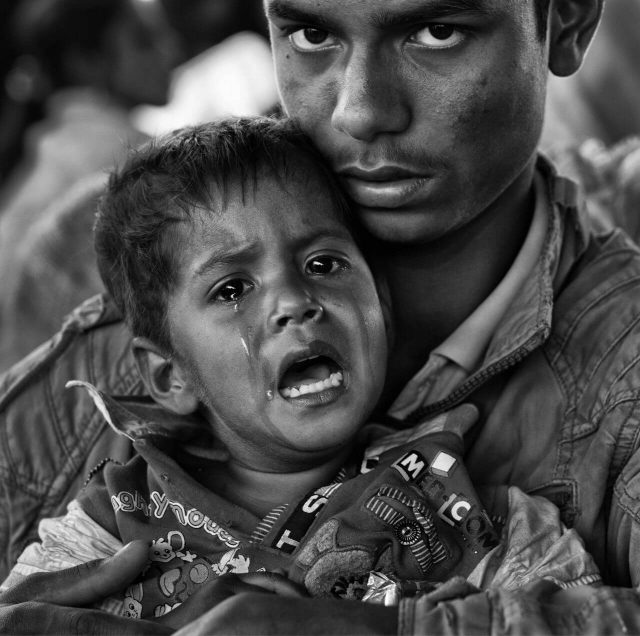 Shobi Ka, a Rohingya woman and her two-year-old baby boy Minar wait for aid to be distributed. (C) Tom Stoddart 2018. 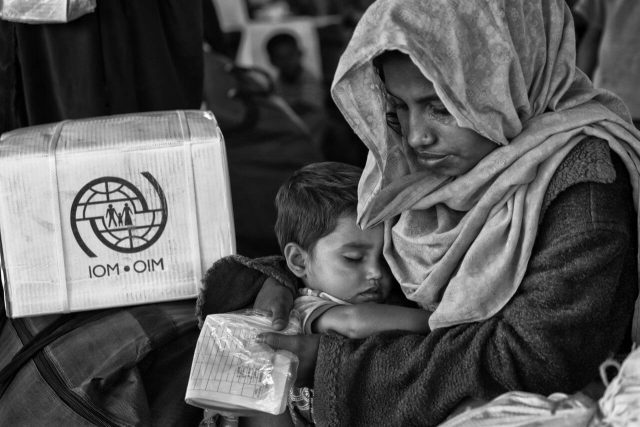 A Rohingya girl waits in line at a distribution of food and blankets by the Bangladesh army ay Noya Para near Cox’s Bazar, Bangladesh. (C) Tom Stoddart 2018. 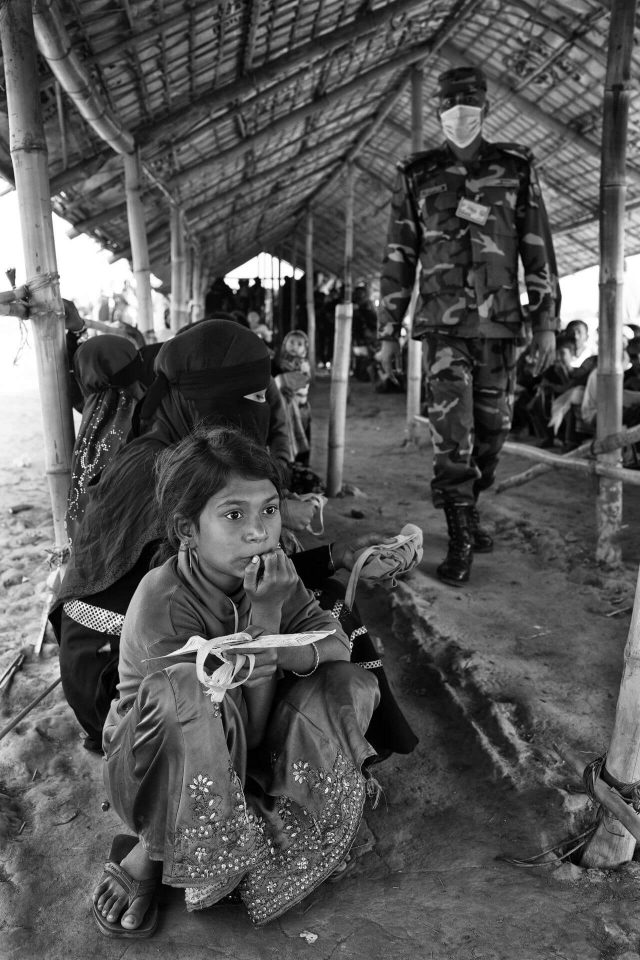 Rohingya mother Nur Jahan cuddles her little miracle at the Norwegian Red Cross field hospital in Kutupalong refugee camp at Cox’s Bazar, Bangladesh. Nur was taken to hospital when it was discovered that the baby inside her had no heartbeat and was presumed dead, but when midwives delivered the 3.3ibs baby boy and put him next to her he started to breathe and cry. 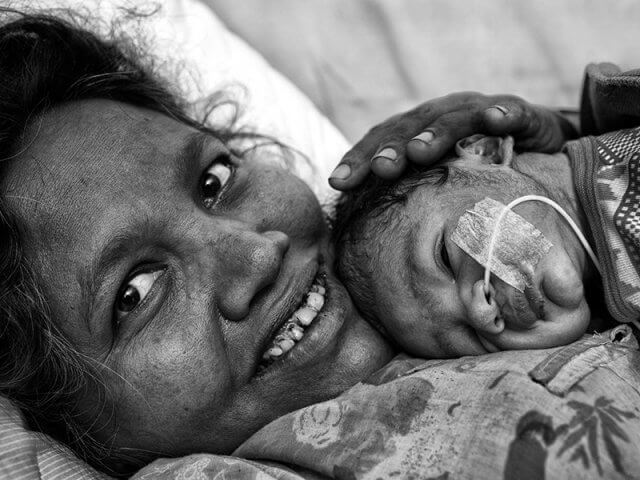 A Rohingya girl comforts her baby brother as they and their family wait to be given aid by the International Organisation for MIgration (IOM) after arriving at Kutupalong refugee camp at Cox’s Bazar, Bangladesh. Over 655,000 Rohingya have arrived in the area since August 2017 fleeing persecution in neighbouring Myanmar. (C) Tom Stoddart 2018. 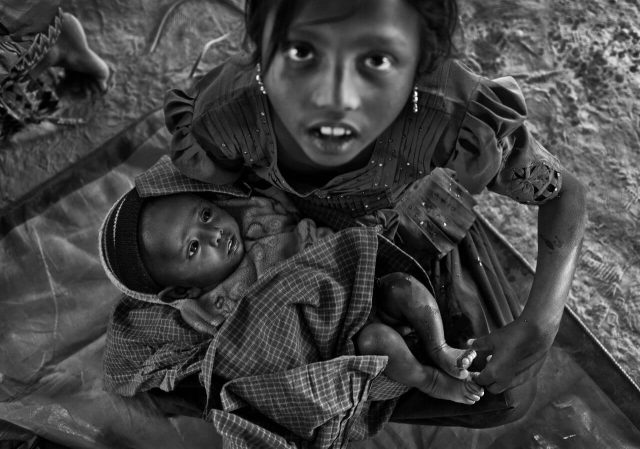 Rohingya children slide down a hill on plastic cannisters in Kutupalong refugee camp at Cox’s Bazar, Bangladesh. Over 655,000 Rohingya have arrived in the area since August 2017 fleeing persecution in neighbouring Myanmar. (C) Tom Stoddart 2018.

Supia Katun photographed in Kutupalong refugee camp at Cox’s Bazar, Bangladesh. The elderly lady was carried by relatives for 3 days over the border between Myanmar and Bangladesh to escape the violence which erupted in August 2017. (C) Tom Stoddart 2018. 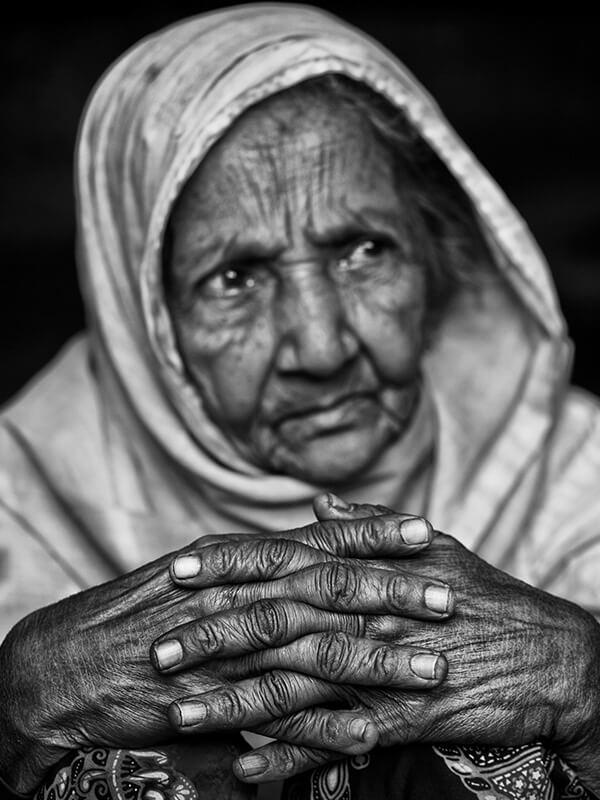 Stories behind the images

Nur Jahan and her new-born baby

When 35-year-old Nur Jahan arrived at the Norwegian Red Cross and Bangladesh Red Crescent field hospital inside the camp, she was convinced her child was dead inside her. He had no obvious heartbeat, and she had not felt him move since she made her journey across the border from Myanmar weeks earlier.

Speaking of the moment he was born Nur said: ‘I was very grateful, if I had not come here then he would have died.’

On average, four out of ten Rohingya babies born in the IFRC field hospital survive, so it was no surprise to the midwives when Nur arrived expecting to give birth to a stillborn. ‘We assumed he was dead when we pulled him out we put him on his mother’s tummy. Then saw him move slightly and take a few tiny little breathes,’ said Ingeborg, the midwife who delivered Nur’s baby.

Although she was still in a lot of pain from the traumatic birth, Nur kept repeating, ‘thank you, thank you, I am happy.’

Supia Katun had been in the camp for a month when this photo was taken. She is unsure how old she is, but thinks around 70.

Supia had lived in the same village for her entire life, until she was forced out by violence. ‘Many people were killed, they shot at us, and so we had to leave,’ she said.

Supia’s family survived the violence, but their village was burned to the ground. Her nephews carried her for three days until they reached the border.

When asked about her life now, she said, ‘it is not so good, I am sick I am suffering, I’m in a pathetic situation.’

In Kutupalong camp, she lives in a shelter at the top of a hill overlooking a sea of thousands of shelters.

The area was built in August 2017 when more than 600,000 Rohingya Muslims crossed the borders into Bangladesh from Myanmar, fleeing conflict and violence.

We provide emergency shelter to families who have lost their home to disaster, enabling them to rebuild their lives.

Support our work and help families rebuild their homes and their lives.